The History of the Airport

The Delano Municipal Airport is an uncontrolled airfield offering a 5,651 foot runway and light aviation services, and is open to the public. The airport was first opened in April of 1940.

The airport plays its own part in the history of aviation in the local area. It saw little military activity during the war, but its advent paved the way for the future of aviation in this area. The city took ownership of the airport from the County of Kern in 1973, and industrial and general aviation development has seen continued growth since that time. The airport encompasses approximately 520 acres, with a variety of parcels available for industrial use and aviation services. 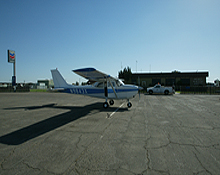 Under the city’s direction, sections of the industrial park have been developed with utilities and infrastructure improvements. Aircraft hangar and aviation service facilities have been constructed. Today, there is almost 500,000 square feet of industrial building in operation on the airport, housing nearly 10 individual businesses and providing just over 45 jobs in the community. The number of aircraft based at the airport has grown from 15 at the time of city acquisition in 1973 to almost 50, today.

Located approximately halfway between Los Angeles and San Francisco, the airport has a service area of over 250 square miles in northern Kern and southern Tulare counties. The airport is located just two miles south of central Delano at the corner of Lexington Street and Woollomes Avenue.

There is no scheduled airline service at the airport. The airport does serve a variety of other significant users. Many military, air charter, air ambulance, and other flying services operate from the airport on a regular basis. There is twenty-four hour AV Gas 100LL fuel sales are available by card lock system, and take most major credit cards. Hangers and shelters are available for rent by calling 661-721-2284.

The airport is owned and operated by the City of Delano. All policy decisions and direction are provided by the City Council. The City Council, recognizing the importance of the airport to the community and the surrounding service area, has adopted an airport master plan, and directed a significant effort to assure the present and future aviation needs of the public be met. The airport has tremendous potential for growth and will serve as a vital link in the transportation services of this area, far in to the future.